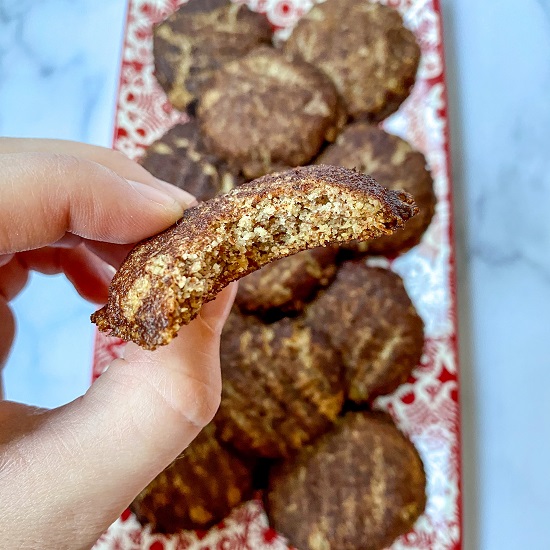 I LOVE snickerdoodles. I think they are a perfectly light and not too sweet cookie option. So it’s about time I made a tummy friendlier recipe! These are completely vegan and paleo snickerdoodles but taste just like the real thing.

They can seem a bit crumblier at first, but trust the process. After they’re fully cooked and cooled they’ll be the best texture AND flavor.

This recipe makes one dozen vegan and paleo snickerdoodles!

Line a baking sheet with parchment paper and set aside. Then mix cinnamon and monkfruit in a small bowl. Roll dough into balls and then roll each ball in the cinnamon monkfruit mixture. Place on baking sheet and lightly flatten with a fork.

Bake for 10 minutes. Let cool on baking sheet for at least 10 minutes, do not try to transfer to a cooling rack as they will be crumbly at first.

Store in fridge or you can also freeze these! I hope you enjoy!

They are SUPER delish!

free from: gluten, dairy and grains I eat salmon often, mainly in the form of salmon salad. When I saw this recent interview with Elizabeth Olsen on the Kelly Clarkson show I knew I had Read more…

free from: gluten, dairy and nuts (vegan friendly) These granola bites are a one bowl recipe, so easy to make for the week ahead. The ingredients are simple and likely items you already have in Read more…

free from: gluten, dairy and grains This Gluten Free Chocolate Orange Layered Cake is so easy to make. You don’t even need a cake pan – you’ll bake this one in a cookie sheet. There Read more…