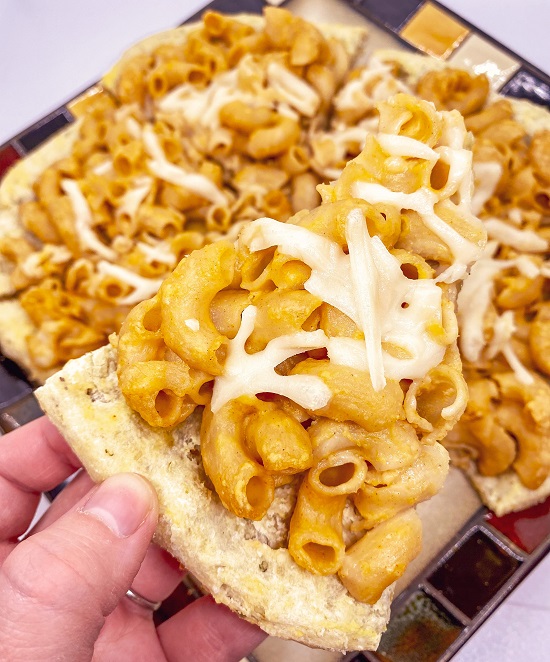 The other night when I came home, my fiancé said he was craving mac and cheese pizza. I had bought some Chebe pizza crust mix earlier in the week so I knew I had all the necessities on hand to make a Vegan Gluten Free Mac and Cheese Pizza.

So at 9pm on a weeknight, this beautiful creation was born.

I honestly didn’t think this combo would work, but it is the perfect mix of these two comfort foods.

This recipe is made without gluten and dairy. It is also vegan as long as you use an egg substitute for the crust!

Note: make this right before you plan to eat it, as it does not reheat very well (gluten free noodles always harden the next day–if you find a brand that doesn’t do this please let me know!!).

Make your crust as instructed on your crust mix (or premade crust). Bake halfway and then take it out of the oven.

While your crust is cooking, boil a pot of water. Once boiling, cook your noodles as instructed. Once the noodles are cooked, drain them and add back to the warm pot with the other ingredients (vegan butter, milk, and cheeses). Stir until creamy. You now have mac and cheese!!

Spread the mac and cheese on top of the partially cooked crust. This should be an even, thick layer. Sprinkle extra mozzarella on top.

Bake for remaining time on crust (~8-10 minutes depending on the crust). Let cool a little and enjoy!

free from: gluten and dairy (vegan friendly) In honor of Veganuary, I’m trying to incorporate more vegan meals into my life. This vegan broccoli salad is easy to make and a crowd pleaser! I’ve brought Read more…

free from: gluten and dairy (vegan friendly) In honor of Veganuary, I’m trying to incorporate more vegan meals into my life. This vegan breakfast casserole is simple, delicious and only five ingredients! I know replacement Read more…

free from: gluten & dairy (vegan friendly) Fruit salad is so common in the summer, but it’s truly underrated in the winter! I find it so refreshing and delicious all year round. Here is my Read more…